Square this week announced a new program for restaurants that lets diners view menus, order, and pay from their smartphones. Activated by QR codes on restaurant signage (think: table placards), the feature is meant to support social distancing and to give diners more confidence to visit participating eateries.

By scanning QR codes, users are taken to a landing page where they can engage in self-serve ordering. On the back end, those features are tied into a given restaurant’s point-of-sale system, run by Square. Restaurants can print out their branded QR code and place it throughout their space.

There’s also flexibility for variable QR codes associated with specific tables — thus indicating where an order is supposed to go — or a single restaurant-wide QR code. The latter is more practical for coffee shops where orders can be placed in a central queue, then identified by calling out customer names.

Overall, the new feature holds advantages in its deep integration with restaurants’ POS systems, menus and table layouts. That compares with point solutions that only take users to a mobile landing page to order items that go into a single queue. Square’s deeper POS integrations also mean better analytics.

The feature is currently available in the U.S., U.K, Canada and Australia to restaurants that subscribe to the Square Online plan or greater. It doesn’t involve additional per-transaction fees beyond Square’s standard revenue share, which is 2.9 percent plus 30 cents per transaction. 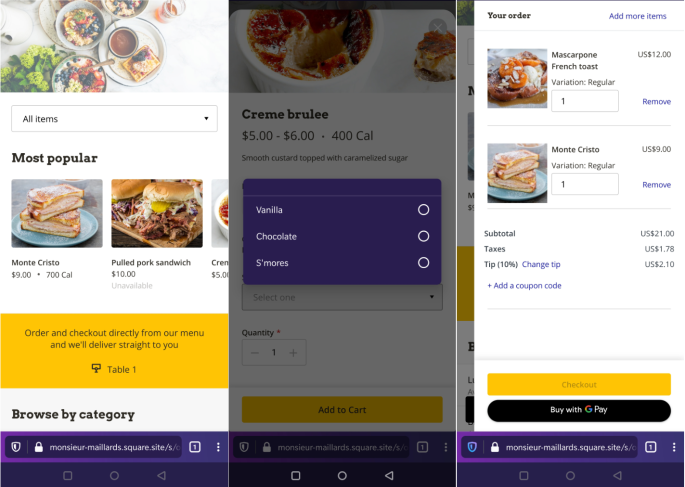 One draw for restaurants to adopt this feature is, again, boosting customer confidence which can make or break restaurant visits these days. In that sense, it could be impactful for restaurants to offset upcoming declines due to colder weather in some regions that will eliminate outside dining.

As for other benefits, square positions the value proposition as:

— Provide peace of mind to diners and staff by limiting contact and shared surfaces.
— Raise efficiency with improved table turn times.
— Free up staff to focus on other tasks.
— Give diners the freedom to order and reorder when they want—without waiting for a server.
— Improve order accuracy by putting the power in the customer’s hands.
— Offer easy payment options with Apple Pay, Google Pay, and Square Pay.s

But how Square benefits from this move? It’s all about customer acquisition. It can also deepen existing relationships, given menu integration and other data. All of these factors could lock-in Square on deeper operational levels with restaurants, thus increasing retention in addition to acquisition.

For a lot of these reasons, restaurant mobile ordering was one of the technologies whose growth we recently predicted. Along with mobile “order-ahead” and curbside pickup, it’s one of the local commerce technologies that meets the moment. Square’s move is the latest validation.

Stepping back, this is similar in some ways to touchless retail. Just like that parallel area of consumer activity, touchless protocols could be in place for a while. Even as we return to normal — or the hybrid “next normal” — a post-Covid world will involve precautionary measures like touchless commerce.

The blessing in disguise is that these technologies have operational efficiencies and other advantages that go beyond social distancing. For example, self-serve mobile ordering means faster table “turn times” which can maximize yield. It streamlines server/diner interactions like ordering and paying.

But it also should be noted that, like many technologies getting a chance to shine these days, self-serve mobile ordering isn’t new. The technology has existed for a while but is now in greater demand. Through that, it could inflect and gain exposure in ways that create permanent new habits among SMBs.

This is yet another example of accelerated digital transformation — a key theme of Localogy’s recent 20/20 event, and Localogy Insider ongoing coverage. For more likely candidates for accelerated transformation in local commerce’s near term, see our top picks here and here.